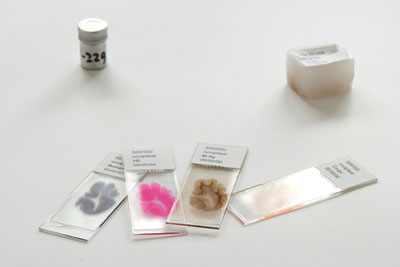 After four weeks of fixation in formalin, approximately eighteen standard regions of tissue are embedded in paraffin, cut and (immuno)histochemically stained. These sections are evaluated by the neuropathologist according to the latest international diagnostic criteria. Together with the clinical diagnosis this will provide the definitive diagnosis of the donor.

This table shows the different stainings that are performed on various brain regions to determine the neuropathological diagnosis.

Click to read more about the diagnostic criteria for each of the diseases mentioned below.

Symptoms of PSP typically present in the sixth to seventh decade of life and consist of postural instability with falls, vertical supranuclear gaze palsy, dysarthria, dysphagia, and cognitive and behavioral disturbances. Typical presentation (onset with falls, gaze palsy and cognitive dysfunction) of PSP is referred to as “Richardson’s syndrome”, whereas the commonest of atypical variants (asymmetric onset, tremor, and levodopa response) is termed as “PSP-Parkinsonism” (Williams et al., 2005). Atypical presentations are difficult to diagnose ante-mortem.

International consensus criteria (see below) are available and differentiate between possible, probable and definite PSP, of which the latter requires neuropathological confirmation (Litvan et al., 1996). According to neuropathological criteria for PSP a high density of neurofibrillary tangles and neuropil threads is required in at least three of the following areas: pallidum, subthalamic nucleus, substantia nigra or pons, together with the involvement of at least three of the following areas: striatum, oculomotor complex, medulla or dentate nucleus (Litvan et al., 1996).

The clinical diagnosis of Parkinson’s disease is based on the presence of motor symptoms. The clinical features include slowness of movements, compromise of balance, muscle rigidity and tremor. Non-motor manifestations, such as autonomic disturbances, sleep problems and psychiatric problems, are common and may antedate the motor symptoms in Parkinson’s disease (Langston, 2006). Dementia with Lewy bodies starts with cognitive decline with fluctuating attention and hallucinations before the emergence of parkinsonism. Parkinson’s disease with dementia and Dementia with Lewy bodies share many clinical and pathological features and are often considered to be part of the same disease spectrum.

Pathologically, Parkinson’s disease is characterized by a selective loss of neurons in the brainstem that produce the neurotransmitters dopamine and noradrenaline. Microscopically, Lewy bodies and Lewy neurites composed of abnormal aggregated proteins, primarily abnormal a-synuclein, are visible inside the affected nerve cells. A recent staging procedure for Lewy body pathology in the brain proposes that Parkinson’s disease begins in the lower brainstem and olfactory bulb (stage 1-2). The pathology progresses from the brainstem to the midbrain and forebrain in stages 3-4. In the end-stages 5-6, the pathological process reaches the neocortex (Braak et al., 2003). Moreover, Lewy body pathology is not only found in the central nervous system but also in the peripheral and enteric systems. The pathology outside the nigrostriatal system may account for non-motor, non-dopaminergic manifestations of Parkinson’s disease. In Dementia with Lewy bodies, the Lewy bodies are found throughout the brain and concomitant Alzheimer’s disease pathology is not uncommon.

Frontotemporal dementia (FTD) is the second most common presenile dementia and is clinically characterized by behavioural changes, language difficulties and executive dysfunction (1. The Lund and Manchester Criteria, 1994). The clinical spectrum of FTD includes the behavioural variant FTD (bvFTD), and two language variants; semantic dementia (SD), and progressive non-fluent aphasia (PNFA). FTD is accompanied by motor neuron disease in 5 – 15 % of the cases.

Neuropathogical examination is necessary for the definite diagnosis FTD. The frontal and temporal are typically severely affected in most FTD cases, but the hippocampus, basal ganglia and substantia nigra are also involved. FTD is part of the clinicopathological spectrum frontotemporal lobar degeneration (FTLD). Three specific protein accumulations have been recognized in FTLD: tau, TDP-43 and FUS. The most recent neuropathological criteria were published by (4) MacKenzie et al, 2010.

A clinical diagnosis of AD is based on the clinical criteria of probable AD (McKhann G et al., 1984 and updated by Dubois B et al. in 2007). These criteria require that the presence of cognitive impairment and a suspected dementia syndrome be confirmed by neuropsychological testing for a clinical diagnosis of possible or probable AD. A histopathological confirmation by autopsy is required for a definitive diagnosis.

Individuals suffering from AD develop pathological changes of the brain. Most conspicuous is the occurrence of extracellular amyloid and intracellular neurofibrillary changes. To establish a diagnosis of AD, six stages of disease propagation can be distinguished with respect to the location of the tangle-bearing neurons and the severity of changes. The first two stages are characterized by either a mild or a severe alteration of the transentorhinal layer Pre-alpha (transentorhinal stages I-II: clinically silent). The two forms of limbic stages (stages III-IV: incipient Alzheimer’s disease) are marked by a conspicuous affection of layer Pre-alpha in both the transentorhinal region and the entorhinal cortex proper. In addition, there is mild involvement of the first Ammon’s horn sector. The hallmark of the two isocortical stages (stages V-VI: fully developed Alzheimer’s disease) is the destruction of virtually all isocortical association areas (Braak H and Braak E, 1991 and Braak H and Braak E, 1995).

After the final diagnosis has been determined, researchers can apply for samples.